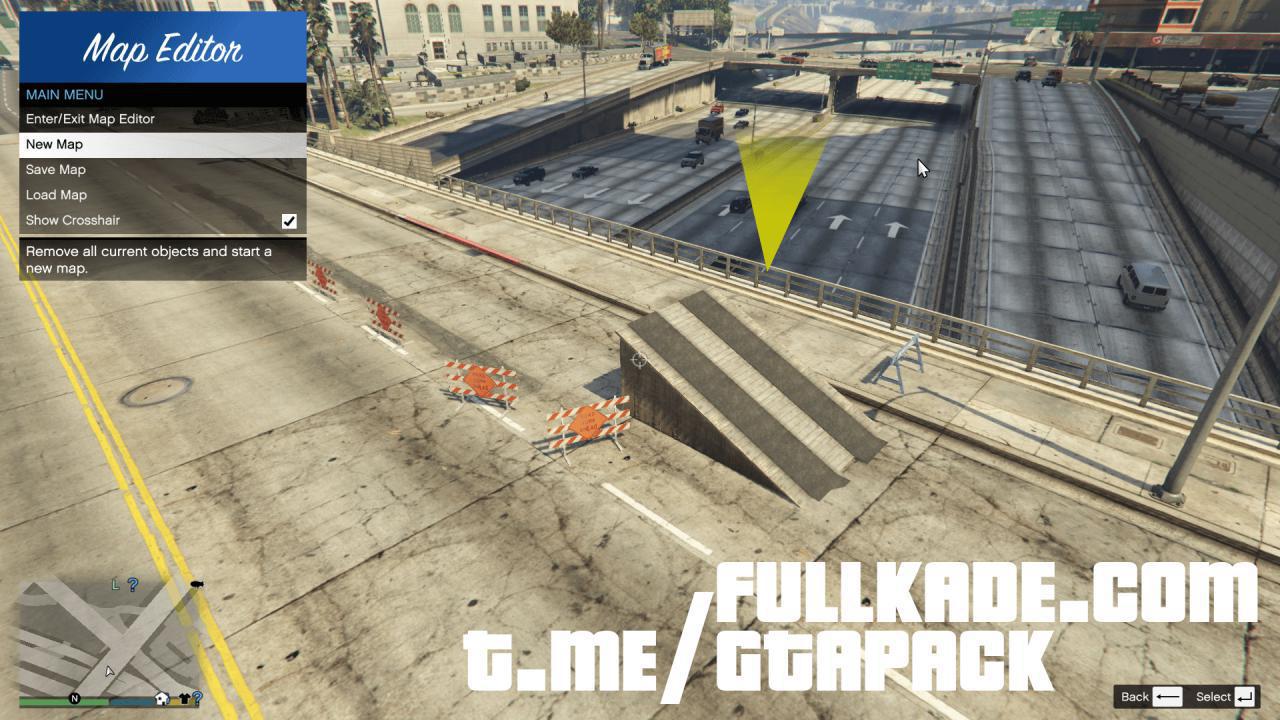 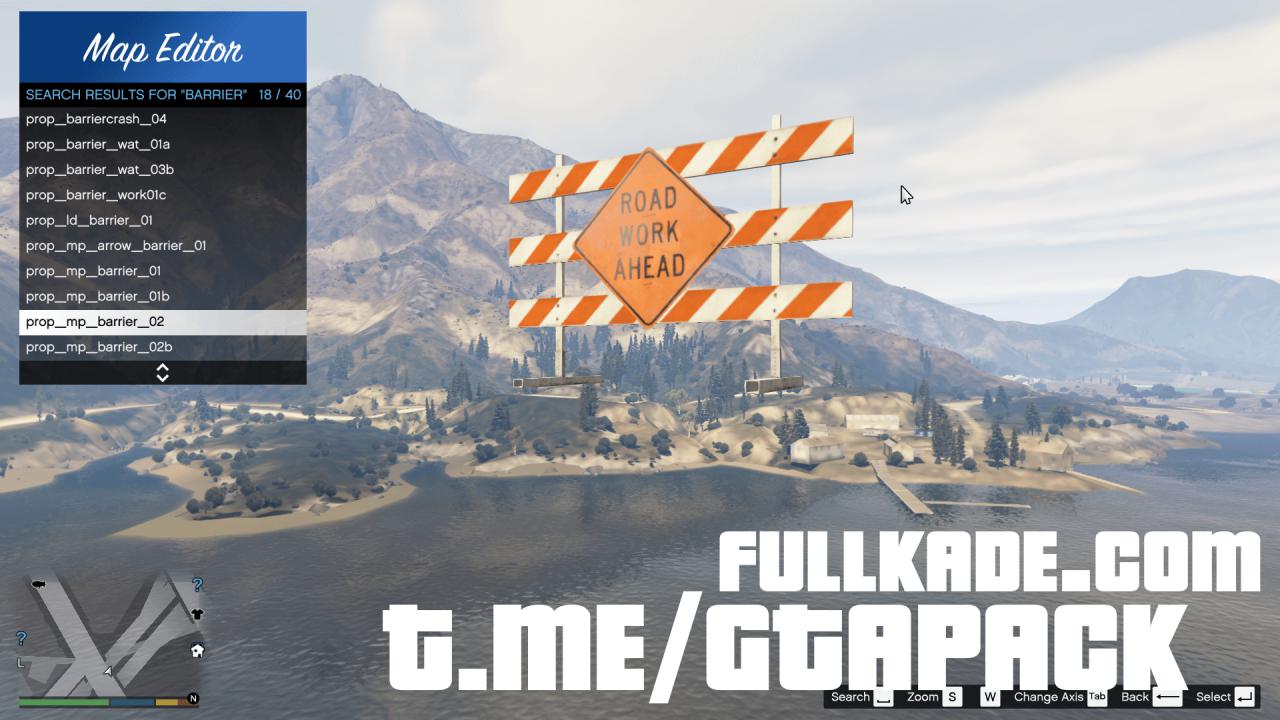 2.12:
– Quickfix for rotation transferring when copying an object.
– Updated the Russian translation thanks to MMK_033

2.11:
– Improved search: you can now use AND & OR keywords for searching. For example, query “heist AND prop” will match prop_heist_carrier, prop_dlc_heist etc, and query “barrier OR barier” will match both prop_barrier and prop_barier.
– Added a new file chooser to the load menu, so you can select a file without needing to type the filename.
– Added map metadata information such as name, author and description.
– Added new marker properties: Mark as Loading Point, Mark as Starting Point, and Only Visible In Editor.
– Added ‘Wander’ idle action.
– Added logging when map editor fails to load a map.
– Fixed culture settings when inputting position coordinates.
– Fixed objects spawning in incorrect positions sometimes.
– Updated Italian and Japanese translations, thanks to PaVI and Shibaneko respectively. Thanks!

2.10:
– Added ability to teleport while inside a car.
– Vehicle colors are now saved.
– Fixed crash when you build outside of map limits.
– Removed the time reset when opening object preview menu.
– Made skipping invalid objects optional. (Change it in settings)
– Fixed C# format yet again.
– You can now ty[pe in your own values for Positions X/Y/Z inside the property menu. Press enter when you have it selected.

2.9:
– Fixed props not being dynamic when using C# format.
– Fixed DirectX game-crashing issue caused by ScriptHookV.
– Organized crosshair & translation files inside a MapEditor directory.
– Every language now has their separate translation file. You’re encouraged to translate map editor and upload your file on this website!
– Added ability for switching languages, and support for more than the default languages.
– You can now edit crosshair images located in scripts/MapEditor

2.8:
– Fixed pickups not spawning at long distance
– Added ‘Door’ property for objects so they won’t fall through the world when loaded.

2.7.1:
– Fixed C# generated script misplacing props and improved LOD distance. You can tweak it inside your .cs map (change the variable named ‘LodDistance’).

2.7:
– Added teleports to markers. All markers are now numbered, you can find it’s ID in the properties window title. You can then set the teleport target of other markers to this ID.
– Added marker and pickup support for C# scripts. The C# format now generates a fully working ScriptHookVDotNet script, so you can share your maps with people that can’t get Map Editor to work. Just place the resulting .cs map in the scripts/ folder.
– Saving with the raw/C#/Spooner/Menyoo format will append the appropiate extension to your path.

2.6:
– Added pickups! Press G (by default) to spawn them in.
– Pickup regeneration time is in seconds. Set to 0 for them to never regenerate.

2.5:
– (Finally) fixed rotations, now you can rotate in any direction without weird behaviour.
– Positionment for props now should be more accurate.
– Removed the huge ‘LOADING’ text and added a smaller loading icon in bottom-right corner.

2.4:
– Added interactive maps! You can now attach javascript scripts to your map! You can find out more info here. Note that these scripts don’t have access to your filesystem, so they should be safe. If you don’t want to run scripts, you can tick it off in the Settings submenu.

2.3:
– Fixed props resetting rotation when changing heading.
– You can now add a model’s name into ObjectList.ini without a hash, and the script will calculate the hash itself (e.g. instead of “hei_heist_kit_bin_01=1251521521” write “hei_heist_kit_bin_01”)
– Stopped using the ScriptHookVDotNet VehicleHash enum and added VehicleList.ini.
– Stopped using the ScriptHookVDotNet PedHash enum and added PedList.ini.

2.1:
– Fixed peds/vehicle search not working.
– Sped up the validation system.
– Added a list of valid objects to use with Object Spawn Unlocker.

2.0:
– Fixed framedrop when backing out of prop search.
– Added a bunch of translations, thanks guys!
– Improved object validation, now it’s slower but should be more accurate.

1.9:
– You can now press Left/Right while in a long list to scroll 100 items at a time.
– Added a bounding box for placed items. This can be disabled in Settings.
– Minor bugfixes.
– Added translations! For now there’s only a Spanish translation. If you know one of these languages, you can help translating the mod! Just edit MapEditor_Translation.xml. Supported languages:
* American,
* French,
* German,
* Italian,
* Spanish,
* Portuguese,
* Polish,
* Russian,
* Korean,
* Chinese,
* Japanese,
* Mexican

1.8:
– Added a way to change the Draw Distance. This affects props, peds and vehicles. Default is 300. This can help your framerate, or you can extend it to remove pop-ins. You can find it in the Settings submenu.
– Please update your ScriptHookVDotNet to version 2.3

1.7:
– Added an autosave feature. It will save your map every interval if any changes have been made. It won’t autosave if you just loaded a map. You also can change the interval time in settings, default is 5 minutes.
– The map is saved to Autosave.xml in your root GTAV directory.

1.5:
– Code optimizations.
– Added a new feature: Ped Relationships. Default is Companion (they will act like they did in previous versions). Others are self-explanatory. I also added Ballas & Grove groups, they’re neutral to the player but hate eachother. Note that they’re not actually ballas & grove groups, so they still will act neutral towards those gangs. With this you can make AI firefights.
– Relationship groups will be set after a map load, or you can set them by hitting enter/Controller A while having the item selected in the ped properties menu.
– You can reset all active relations in Settings > Reset Relationship Groups.
– Added a weapon option for peds. Same behaviour as in relationship groups.
– Added a siren checkbox for vehicles.
– This is one of the last updates.

1.4:
– Fixed gimbal lock when rotating objects. Now you can freely rotate entities in all axis.
– The radar is now hidden while in map editor.
– When leaving the editor, you’re placed at the ground.

1.3.1:
– Re-added the removed scenarios
– Fixed some scenarios not working. Thanks jedijosh920 for saving my ass.
– Added Any – Warp and Any – Walk options for scenarios.

1.2.1:
– Fixed markers disappearing after loading a map. This change is not backwards compatible.

1.2:
– Added a new scenario for ped: Any. The ped will find something to do. Experiment with this by placing the ped at the beach, near benches, etc. Thanks to jedijosh920 for the find.

1.1:
– Added scenarios for peds. Just select a ped and there will be a list with all scenarios available. Click on the current scenario to play/stop it. The scenario doesn’t need to be playing for it to be saved. Scenarios autoplay when loading the map.
– Added a way to disconnect a mod without cleaning the map. Just select the mod again and it will disconnect.

1.0:
– Added ~1k valid objects for spawning.
– Added marker spawns.
– Created a Map Editor API: add the .dll to the references in your mod, create a ModListener object and suscribe your mod. When people select your mod from a list, the save function will be passed to you for saving. See the Community Races mod for reference.

0.9:
– Added ability to remove world objects by using the usual delete button. These deletions can be saved in an XML file so when it’s loaded, these objects will be automatically removed from the world.
– Added ability to copy objects from the world, by using the usual copy button.
– The crosshair/orb changes color based on what you are currently aiming at: White for nothing, Blue for World Entity (can be copied/deleted) and Yellow for Script Entity (Your own map entity).
– Objects deleted from the world can be put back in place using the CurrentEntities menu.

0.8:
– Removed prop streaming since Alexander upped the object cap to 2048. Download the latest ScriptHookV for this to work. (here)
– Added a “Current Entities” menu, due to this map loading times have increased.
– Added an option for the camera to follow the prop when it’s selected.
– Bugfixes.

0.7:
– Removed the 250 prop limit. The more props you spawn, the worse performance you will get. You can change the prop draw distance in the settings menu. To disable this feature, change the draw distance to 245 props and do not go over this limit.
– Settings now save to MapEditor.xml
– Added a prop counter, which turns yellow when the prop streaming service kicks in.
– Added a gamepad option, when turned off disables the LB + R3 controller combination.
– Increased the accuracy in the prop details window.
– Bug fixes.

0.6:
– Prop movements are now relative to the camera’s position.
– Added a way to load maps on startup: create a folder in your scripts/ folder named “AutoloadMaps”. Any .xml or .ini file located there will be loaded at gamestart.
– Added a new crosshair option: orb.
– Added an option to validate current object list.
– Reduced object list to remove any invalidated objects thanks to sjaak327.
– Misc bugfixes and improvements.
– If you save/load a map without the extension, it will be added automatically.

0.4:
– Added a Properties window when having an entity selected.
– Fixed a bug where you couldn’t clone peds.
– Laid the base for object streaming

0.3:
– Added full controller support
– Added instructional buttons to aid you.
– Added a camera sensitivity option.
– Removed some invalid objects.
– Changed how freelook works so you don’t need to be in fullscreen anymore.