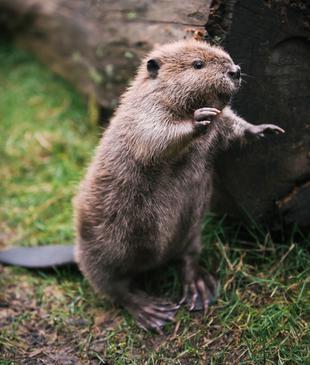 Once, there was a forest named Freeville. It had many trees and a river. There lived many animals, birds and fish in Freeville. Among them were also the Beavers.

It so happened that all the animals of Freeville started to fall ill suddenly. The Fox was the doctor of Freeville.

Thus, all the animals went to her and said, “Oh doctor! Many of us are falling ill. We do not know which disease we have. Please help us!”

The Fox checked her patients. Then, after much thought, she said, “Friends! I do not know the disease that is causing your illness. However, I can tell you of a cure. You should all sleep with a Beaver’s tail under your pillow. Then, you shall get well.” Thus, all animals panicked and began to hunt the Beavers. Many Beavers were killed in this manner.

One such day, a Dog was chasing a Beaver to obtain his tail. The Beaver was a smart one. He knew that it was only his tail that the Dog wanted. Thus, he cut off his tail himself and threw it to the Dog. Then, he ran away with his life.

Do not lose your mind in trouble.